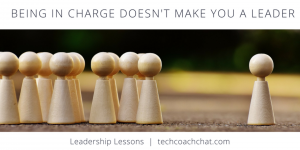 I had the chance to talk with a friend about leadership the other day.  We both struggle to walk the balance between being in charge and leading.  While the dictionary seems to equate the two, they are very different.  We came up with a short list to keep in mind so that we could stay on the right path:

So I couldn’t help but think of a scenario that demonstrates the difference clearly:  Star Trek TNG Episodes 136 & 137 – yes, I went there. The two-part episode is called “Chain of Command”. Captain Picard is assigned to a covert operation and a new captain, Captain Jellico, is assigned to the Enterprise. The difference between the two captains is like night and day.

Picard, a leader, would ask questions and get feedback before arriving at a decision and telling first officer Riker to “Make it so.” Jellico simply states what he wants to have happen and tells Riker to “Get it done.” It’s interesting to watch the evolution in ship culture the change in leadership brings.  Riker, a decorated officer who had been offered (and turned down) a promotion to captain twice, becomes sullen and withdrawn. Under this new captain, Riker is confined to quarters for insubordination.  How does a shining star become a pariah seemingly overnight?  If you get a chance, you should watch it.  It’s a perfect case study for managers on what not to do.  If you only have two minutes, watch this video where the two men have an honest chat.