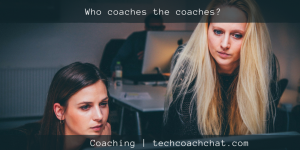 I got a call yesterday from a friend who just began coaching in January.  Preparing for #ISTE17, she was concerned that she was loosing her relevance and that teachers wouldn’t listen to what she had to offer since she was no longer in a classroom. She’s been helping teachers learn new strategies both formally and informally for decades and now because she’s out of the classroom she has nothing to offer??  She was in a real quandary, so I tried not to laugh. I talked her down and helped her to understand more about her new role.

I wonder what happens for other new coaches.  I know that at the ISTE conference we typically see a lot of new coaches who are just thrown into the role with little preparation.  They desperately want to connect with others in the role so that they don’t feel so alone.  Even when they are in large school districts with well established instructional technology departments, many find the prospect of the new job overwhelming.

As an experienced coach, I remember what that feels like.  I accepted my first ed tech coaching role just before the end of the year and realized that I for the first time I had no idea what my role was to be.  As a 12 month coach I was to report for the first day on July 1st and I was both excited and yet dreading that first day.  I was fortunate in two ways: I was hired to a brand new team and no one new exactly what we might be doing and by new supervisor gave me most of the summer to research and figure out how I would approach the role. Not everyone gets that opportunity.

Eventually, we set up a mentoring strategy for new coaches on our team.  We realized that technology using teachers had to be groomed into coaches.  They spent a significant part of their first year shadowing their mentor, assisting with coaching activities and learning how to engage teachers in the new role.  Anytime they ran into an issue they knew who they could turn to and how to get help.

Given the number of inquiries we get at ISTE, I guess many folks don’t have ed tech coaching onboarding programs.  Who do you reach out to when you need some help?