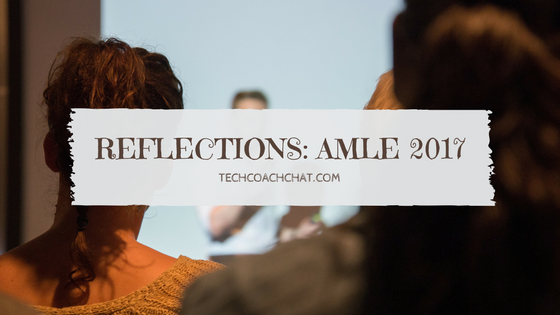 My time at the AMLE conference was interesting.  It’s been a long time since I went to a conference where the focus was not technology.  A number of participants came with paper notebooks and no device.  While the conference itself was very informative, I had some difficulty with the presentation styles of a number of the sessions that I attended. Some of the presenters wanted to make sure that there was participation in their sessions – everything from sort yourselves into groups and complete X to periodic movement activities as though we were middle school students.

Don’t get me wrong, I learned a lot…but I wasn’t comfortable in all of the sessions. I think the assumption that everyone wanted to be up and active and talking to people they don’t know, didn’t take into consideration different learning styles.  Yes, I am one of THOSE participants.  I want to learn, but I am not a joiner. I was OK by day #3, but the first day was rather brutal…

Some highlights of the conference included:

My notes are here if you want to see them…

No comments yet
conference social media